Despite being banned by a Parliament legislation, The Employment of Manual Scavengers & Construction of Dry Latrines (Prohibition) Act 1993 and honorable Supreme Court ruling  (in PIL 2003 Writ Petition (Civil) No. 583/2003 Safai Karamchari Andolan and 14 Other Organizations Vs. Union of India and Others) the practice is still continuing mainly because:

Ideas and Motivation behind the Initiative

Manual  scavenging  is  done  by  one  of  the  scheduled  castes  known  as Balmiki community  and  worse ,  among  them  by  women  including  minor  girls. This is one of the worst known employments in human history and memory that directly hits at the dignity of individuals carrying on manual scavenging. The entire family of Manual Scavenger has to go through the dilemma of lifelong self esteem, experience physical and social segregation and even untouchability.The dry latrines affect its users by exposing them to all types of health hazards, much worse than those caused by open field defecation.  Especially it affect women and children who are in the house for most of the times in the midst of stinking environment and flies, exacerbated further by delay in cleanliness.

Purpose & priorities of the initiative:

1. Team Building- The strength of the Initiative rested on the intensive deliberations and informed decision making among the district, tehsil, block and village level officials and workers. Accordingly teams for each tehsil and block were formed with district level officials as nodal officers to generate awareness on total sanitation and review the rescue and rehabilitation of manual scavengers and the progress of dry toilets conversion. To carry out the task in such a large number of villages a strong educated and motivated village level team was also required and the team was formed with village pradhan & Panchayat Sachiv as leader and  BDC member, primary school teachers, shiksha mitra, ANM, Anganwadi worker, ASHA, Rojgar Sewak, ration dealer, lekhpal, safai karmi, as key members.
Workshops at the block level were conducted under the leadership of District Magistrate and other senior officers with village level team.

Awareness Meetings in Villages: District level nodal officers along with their respective tehsil and block functionaries organized series of workshops and open meetings, numbering around 500 in all, in the villages to orient the masses on the ill effects of dry latrines and other issues of health, hygiene and sanitation as also of the legal implications and penalties of having dry toilets and engaging manual scavengers. While launching the program in any particular village thorough cleaning of each village was done by deploying 10-15 sweepers from nearby villages, Education department organized meetings with parents and children on the issue and had rallies, Department of Health organized Health Camps and took Hygiene Education Sessions and informed the community about the ill effects of dry latrines, provisions of the act prohibiting dry latrines and manual scavenging were also explained to villagers through wall writings. This exercise sent the message of the campaign to every corner of the village.

2. Involvement of Gram Panchayats, Gram Pradhans and Grassroots Government functionaries: Involvement of Gram Panchayat Representatives (Pradhans) and grassroots government functionaries who were village level team members was also on agenda. This group was very crucial as this group is usually more educated and influential in the village and if they start working in a direction then other people will definitely follow them. In a letter dated 30 July 2010 District Magistrate mobilized district departments to ensure that all the grassroots level functionaries of their departments have pour flush latrines in their houses so that the positive message is conveyed to village masses. Gram Pradhans, coming with promising results, were honored by District Magistrate in open meeting and this really worked in motivating other Pradhans.

3. Manual Scavengers and Daliya Jalao (Burning of Baskets): Several meetings were organized with manual scavengers to convince them to leave their job. The influential people from Balmiki community were also contacted and mobilized. A poster developed by them was got printed and they were provided with vehicles for moving to distant places using IEC fund.
The poster named Naya Savera brought a new morning, as its name meant, to many villages. But for them what was most important was to counter the hegemony and destroy the legitimacy that the society has given to manual scavenging through centuries of oppression.
The wicker baskets and brooms which are used to collect and carry human excreta are the primary symbols of slavery and the mark of scavenger’s identity. Hence it was decided to collect baskets and brooms and as a final ‘NO’ to manual scavenging in that village burn it in front of everybody.
It ended their century long bondage with scavenging work. It was like a bone fire celebration of freedom for manual scavengers. Soon it became mark of liberation of manual scavengers and demand from other villages started coming for organizing ‘Daliya Jalao’ 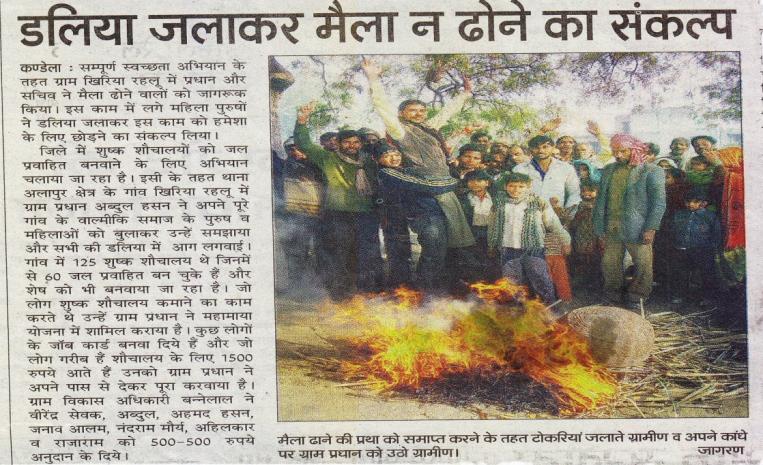 5. Rehabilitation of Manual Scavengers: It was decided to provide them with a rehabilitation package at their door step to gain their confidence. They were given benefits of various schemes such as loaning schemes (SCP,SGSY), MNREGA, TPDS, pension schemes, special scholarship for children, Rural housing schemes and skill up-gradation training.
The District Supply Officer was asked to provide the Manual Scavengers BPL and Antyodaya cards. Since no such new cards were available first ineligible people holding such cards were identified and their cards were cancelled to be given to eligible scavengers. Some were included in state government’s new scheme, Mahamaya Garib Arthik Madad Yojna.
The manual scavengers whose children were studying were to be provided with the special scholarships and those who were eligible for any of the pension schemes were to be provided with it. It is utmost important to get the children of manual scavengers enrolled and study in the schools so that the differences that are generated right from the childhood are minimized.
They were given special scholarship at the rate of Rs 1850, not given till now merely because of denial of existence of scavenging work, and it was ensured that they sit and have MDM with other children. The loans meant for Buffalo keeping were also provided and an eye was kept on the fact that the milk from the hands of a balmiki shall not be denied access to the market. MNREGA job cards were given to the families of manual scavengers and in order to provide immediate relief, new works were started to provide employment to them under MNREGA. Health camps were also organized for scavengers to treat them for skin and other diseases caused as the result of this work.
All this not only resulted in helping the manual scavengers to take the decision of leaving the work but also helped in their social inclusion. Two components were deliberately introduced into the package of rehabilitation one was the provision of flush toilets in houses of manual scavengers and another training them as masons which not only ensured a benefit for them but also ensured that they were their own change agents.

6.  Low Cost Latrine Model: Super structure of the existing dry toilets was used. Acceptance of small pit toilet was made by convincing villagers about longevity of small pits. In some villages individual beneficiaries were not in a position to go to markets, which were sometimes very far away to purchase small amount of materials required for construction. All sorts of material such as bricks, cement, and sand were made available on demand through government machinery in the villages to tackle the problem. Beneficiaries themselves were used as labor and money was given once they dug the pit. To start with some toilets were constructed as model in each village to demonstrate that a basic minimum structure could be built with around Rs 2000, and even less if beneficiary himself contributes as labor.

7. Fund management; initially funds for incentive money were available for only around 6000 toilets. It was found that part of funds released under TSC to various village Panchayats during the last 5 years were unutilized. Such villages were identified and funds were reallocated. Thus an amount of around Rs 15 million was recovered and given to the BPL families at earlier rate of Rs.1500 under TSC, which was hitherto not even known to not have been spent.

OUTCOMES OF THE INITIATIVE
In a span of one year, the Initiative has been successful in removing almost all of the existing 50000 dry toilets and converting them into Pour Flush latrines with 100% usage in 535 villages and stopping practice of manual scavenging fully.
The work has been successful in liberating 2750 Manual Scavengers and the district is now free from the inhuman practice of manual scavenging. These manual scavengers, their children and family members have been successfully linked to government schemes and programs, and have also engaged in alternative trades like mason work; other skilled labour works; buffalo keeping for which loans and training were being imparted. Their children have been enrolled in school and given special scholarship. 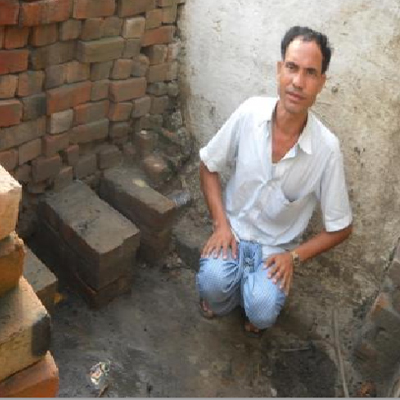 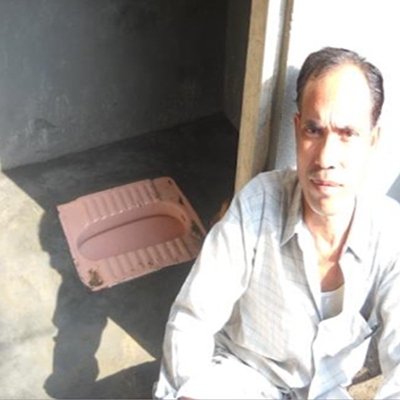 During the campaign approximately 7,000 village level government functionaries have constructed their own toilet. They set example for other villagers and generated positive atmosphere for the elimination of open defecation. The users of dry latrines and people of villages are feeling the extinction of flies that used to be there in their houses and report that their houses and streets no more stink with the foul smell of human excreta. The impact of this on health is very obvious and has historically shifted the paradigm of health and sanitation conditions in those villages.

Sustainability of the initiative: The Initiative has inbuilt sustainability. First the dry toilets have been eliminated from the districts. Former dry toilet users, now using pour flush toilets are themselves feeling liberated. Manual Scavengers have been liberated from the inhuman practice of manual scavenging and linked to government schemes, programs and services and have also been provided alternative trades through trainings and loans.
They have been main streamed remarkably in a very short time. Since rehabilitation is a long term process, efforts for their further benefits/employment opportunities are also being made by successive DM’s. Most importantly the participatory approach of initiative has contributed in the recovering the lost ‘Agency’ of liberated manual scavenger women and during the campaign itself they became strongly committed that neither they will do manual scavenging nor allow anybody else in the village to do it.